Want to Be Healthier? Why Don’t You Try Tai Chi

Want to Be Healthier? Why Don’t You Try Tai Chi

The world is certainly getting a little smaller. Perhaps a large part of the credit goes to our modern telecommunications systems, the foremost of which is the Internet. It has allowed people from all over the world to connect in ways that would have been unimaginable just a few decades ago. Social media platforms such as Facebook, chat rooms and other Internet-powered platforms allow people to exchange ideas, get to know each other and learn about each other’s cultures. Perhaps that is why here in the UK, we have discovered countless new possibilities that the world has to offer. Besides new types of food, new languages and sometimes even new sports, we are also exposed to certain exercises that have been practiced in other parts of the world for hundreds of years. Such is the case with tai chi. 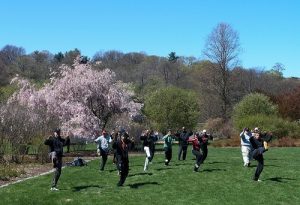 Click here to discover the world of quick and nutritious snacks

It all started in 13th-century China, where tai chi was initially developed as a martial art, partly for self-defence and partly to really give the other fellow a good walloping. But over the ages, its aggressive nature was transformed into an extremely healthy ritual, one which continues to be practiced by millions in China today, but which also is beginning to get many adherents in the western world. How can such an ancient practice find relevance in the modern world? Basically, because it works. But many people really don’t understand either why it works or how to perform it and therefore tend to ignore it completely. But especially for older people, its movements and its general philosophy are quite subtle and do not require a tremendous amount of physical effort, yet yield amazing results.

It’s No Fun Getting Old

Few would disagree that that is an understatement. As we get older, the body slowly starts to lose its vitality and strength as well as its elasticity. Many people over a certain age don’t have the stamina or the strength to perform truly strenuous exercise. Those that do should count themselves among the lucky. For everyone else, alternative forms of exercise such as tai chi provide an opportunity to engage in health exercise and address the specific needs of the older generations. By combining deep breathing with slow and graceful movements, it is part exercise and part philosophy, all blended into one. Several studies have shown that it can help reduce stress along with improving an individual’s sense of balance and give them some much-needed muscle strength, especially in the legs. With the baby boomer generation entering its sunset years, forms of exercise such as tai chi could not have become popular at a better time, allowing the older population to continue to stay active, while minimizing any chance of injury.

Another secret to having a healthy life and a sense of well-being in your later years is by carefully watching everything that you eat. Good nutrition should start in the very early years of childhood and is something that should be followed all the way through adulthood. Sometimes, there isn’t enough time to make really healthy and delicious meals on the fly. But if you click here, you’ll find many products which provide excellent nutritional value and extreme ease of use. Now get out there and practice some gentle movements!