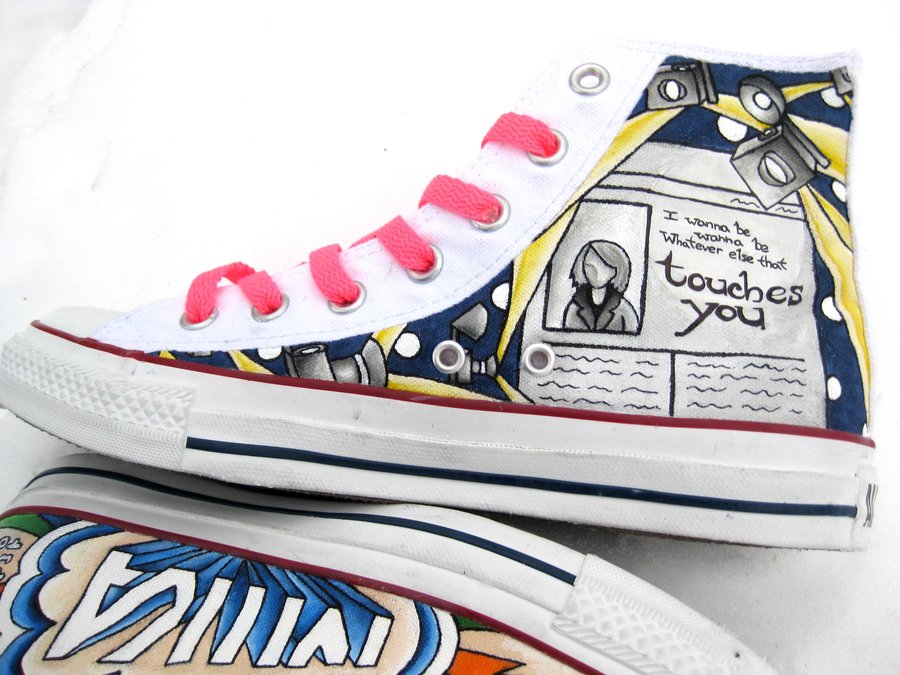 Converse may have begun life as sporting classics but theyve become something else entirely in the last twenty years.

The kind of scenes that have adopted the Converse brand are largely those scenes that prefer to have no affinity with any brand at all. Somehow this particular classic make of shoe has infiltrated the very markets that resist the most intensive forms of advertising – the subcultures that dont want anything to do with popular culture.

Thats not to say that Converse trainers arent pop – theyre clearly very pop. Radio 1 listeners are just as likely to be decked out in colourful pairs of Converse as anyone else. Instead, the trainers completely transcend the internecine struggle of pop-culture versus counter-culture.

But which hubs of counter-culture have adopted Converse as their shoes of choice against the odds? Where are you likely to find Converse shoes, where you wouldnt find, say, Lipsy dresses?

Go to any gig on the indie scene and youll find yourself in a kind of Converse stampede. Those who enjoy the indie scene (and we mean the genuine indie scene, not just any collection of flavour of the week guitar bands) see Converse as their ideal shoes. Why? Well, largely because they look brilliant when they are beaten up and worn out by gig after gig after gig. Theyre comfortable andthey fit the sort of un-uniformed uniform that goes with the live music scene.

The student population love their Converse trainers. Step into a student bedroom in any major city in the UK and there youll find at least one pair of Converse, probably in a state of total disrepair. However, that state of disrepair wont stop them getting worn every day. Itll enhance their image.

Converse shoes are so adaptable and versatile that students can get away with wearing them to lectures, on nights out and everything in between. They dont need different pairs of shoes for different events – they just need their trusty Converse. This means they can save their pennies. Dont be surprised if every Converse sale you come across is heaving with students!

Skaters generally resist most forms of marketing, but they certainly have their favourite counter-culture brands. Converse certainly compete with all the other big names when it comes to skate shoes and the kind of trainers that fit this scene, the Vans and the DCs and Etnies of this world. Comfort and colour are central to their appeal in this setting.

Certain parts of the UK are home to creative types who are sometimes labelled hipsters. Some of them love the term, some of them hate it, but its being used more and more so everyone will have to get used to it.

The hipster mentality celebrates individualism, but it also celebrates vintage style. Thats why so many hipsters shop in second hand boutiques and other indie stores. They dont generally go for clothes that are found on the high street because it contravenes the rules set by their philosophy.

And yet, most have a pair of Converse or two at home. Some have a massive collection in all colours and designs. This is testament to the appeal of Converse. Their simplicity is probably the main source of their appeal to hipsters – they go with anything and they exist outside the paper thin trends that creative types prefer to avoid if they can. Those hipsters who want to resist the allegation that they are trying too hard can always point to their Converse as evidence of the opposite.