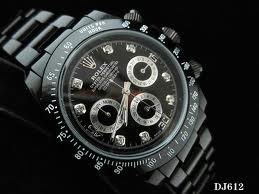 Rolex watches are popular with sportsmen and sportswomen. Rolex has actually sponsored all the major sporting events for decades. From a fashion perspective, Rolex watches are seen as high performance time pieces making them particularly relevant to sport stars. Rolex continue to pay major sports stars to market Rolex watches as a must have fashion accessory. Not only are Rolexes accurate timepieces but they have a durable design, in particular when exposed to water because each model has a waterproof Oyster casing. Rolexes are worn not just by soccer and snooker players but also world-famous tennis stars. Rolex has a close association with tennis because it has sponsored the Shanghai Masters. Many tennis players who have competed in the Shanghai Masters wear Rolexes and continue to endorse the bran such as the following:

One of the most charismatic tennis players of his generation, Roger Federer has won many Grand Slams. Having starred in numerous Rolex advertising campaigns, Roger Federer has worn Rolexes whilst playing in various tournaments around the world. With a successful career that dates back to the formative years of the 21st century, Federer has worn many Rolex models. When wanting to sell a Rolex watch via EBay, in particular the Day-Date, it can be stated that Roger Federer owns a similar model.

As with Roger Federer, Novak Djokovic is regarded as a superb tennis player. Having won countless titles, which includes many Grand Slams, Djokovic has been photographed wearing Rolexes not just whilst competing but also outside of tennis. Consequently, many people have bought the same Rolex watches that Novak Djokovic has worn.

The first African-American tennis player to win a Grand Slam as well as represent the United States in the Davis Cup, Arthur Ashe remains an inspirational figure. The stadium that hosts the US Open was named in his honour. Since then, other African-American tennis players have achieved considerable success such as Venus Williams, Serena Williams and James Blake. During his career, Arthur Ashe wore many Rolex watches, such as the President. Although Arthur Ashe passed away in 1993, photographs of him wearing Rolexes continue to be printed online and in newspapers.

A successful Chinese tennis player, Li Na has won many titles throughout her career, including several Grand Slams. Having helped to promote tennis in her home country, Li Na has appeared in many Rolex advertising campaigns which have been shown in China. Consequently, when wanting to sell a Rolex watch that is similar to what Li Na has promoted, there can be considerable interest in it.

The first British man to win the Wimbledon singles title since Fred Perry in 1936, Andy Murray has won other Grand Slams since then. Regularly ranked among the top 5 players in the world, Andy Murray has won numerous Rolexes during his career, such as after defeating David Ferrer in the final of the 2011 Shanghai Masters. As photographs of Andy Murray winning this title appeared in the media, such as China where the tournament was held, many people saw them. Kim Sears, who is Andy Murrays partner, has worn Rolex watches whilst cheering him on. As Andy Murray continues to play in competitions, he will probably win even more Rolex watches in the future that are worn extensively both on and off the court.

This article was published by http://www.watchprofessionals.com. They are part of the BQW group who specialise in buying and selling Luxury pre-owned watches such as Rolex. If you are looking to sell a Rolex watch then contact them for a free valuation.